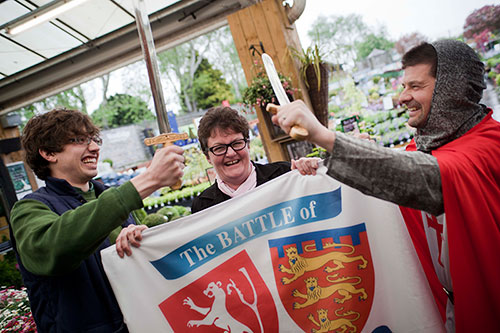 Organisers of the forthcoming Battle of Evesham 2015 Festival have announced that Evesham Country Park is the latest sponsor to pledge financial support for the two-week event which begins on 1 August.

The popular retail and visitor attraction, soon to be known as The Valley, has gifted £5k to the festival joining other local businesses keen to capitalise on the publicity opportunities available.

As well as agreeing sponsorship, the Park is also planning a number of additional activities to help promote the festival to an even wider audience.

“We will be running a series of events over coming months to help attract as many visitors as possible to what will be the town’s biggest public event in recent years,” said manager Maria Hughes.

“We are producing a special Battle of Evesham commemorative flag which will soon be seen on one of the huge flag poles on the main entrance roundabout to the Park.  And throughout the summer, visitors will also be able to take part in historically-themed activities and workshops.  Our on-site retailers too, will be running window displays and dressing up in medieval costumes.  We are thrilled to be on-board as a sponsor and supporting Evesham.”

The festival, which runs from 1-15 August, marks the 750th anniversary of the Battle of Evesham.  To commemorate the battle, there will be two weeks of entertainment in and around the town, culminating in a two day re-enactment over the weekend of 8-9 August on Crown Meadow with supporting attractions throughout.

“We have various business sponsorship activities available, either in-kind or financial, and welcome Evesham Country Park on-board,” said festival organiser, Antonia Coles.  “We are encouraging as many local businesses to get involved.  All sponsors will benefit from extensive publicity in front of an international audience.”

You can leave Comment(s) as a guest, but if you want to become a member of this site...