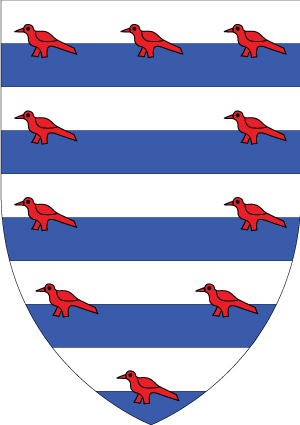 William de Valence (died 18 May 1296), born Guillaume de Lusignan, was a French nobleman and knight who became important in English politics due to his relationship to Henry III. He was heavily involved in the Second Barons' War, supporting the King and Prince Edward against the rebels led by Simon de Montfort. He took the name de Valence ("of Valence") after his birth-place, Valence, near Lusignan.

This favouritism to royal relatives was unpopular with many of the English nobility, a discontent which would culminate in the Second Barons' War. It did not take long for William to make enemies in England. From his new lands in South Wales, he tried to regain the palatine rights which had been attached to the Earldom of Pembroke, but his energies were not confined to this. The King heaped lands and honours upon him, and he was soon thoroughly hated as one of the most prominent of the rapacious foreigners.

Moreover, some trouble in Wales led to a quarrel between him and Simon de Montfort, who was to become the figurehead for the rebels. He refused to comply with the provisions imposed on the King at Oxford in 1258, and took refuge in Wolvesey Castle at Winchester, where he was besieged and compelled to surrender and leave the country.

However, in 1259 William and de Montfort were formally reconciled in Paris, and in 1261 Valence was again in England and once more enjoying the royal favour. He fought for Henry at the disastrous Battle of Lewes, and after the defeat again fled to France, while de Montfort ruled England. However, by 1265 he was back, landing in Pembrokeshire, and taking part in the Siege of Gloucester and the final royalist victory at Evesham. After the battle he was restored to his estates and accompanied Prince Edward, afterwards Edward I, to Palestine.