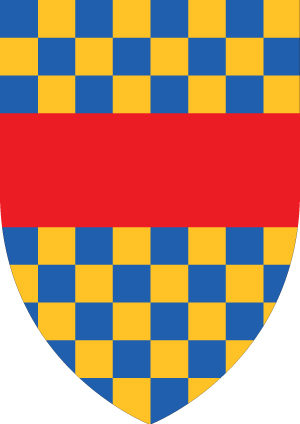 Roger Clifford (d. 1285?), soldier and judge, was the son of Roger de Clifford of Tenbury, second son of Walter de Clifford, brother of Fair Rosamond, by Sybil, daughter of Robert de Ewyas, and relict first of Robert, Lord Tregoz, and then of William de Newmarch. He was a minor at the date of his father's death (1231 ?).

In 1259 he was among the suite of Henry III in France during the negotiations for the treaty of peace which was concluded in that year with Louis IX. Three years later suspicions of his loyalty were aroused by a letter which, as representing the marcher barons, he sent to the king urging upon him the observance of the provisions of Oxford, and he was forbidden to joust or appear in arms, particularly during the king's absence overseas, without a royal license.

The effect of this injunction was, however, neutralised by a commission issued almost simultaneously, and doubtless at the instance of de Montfort, by which he was placed in command of the royal castles of Ludgershall and Marlborough. In 1263 he joined the insurgent barons under de Montfort, ravaging the Welsh marches with Roger de Leybourne and taking Hereford and Bristol, and was excommunicated. The following year he returned to his allegiance and played a prominent part in the siege of Nottingham, taking prisoner Simon de Montfort the younger.

He was rewarded with the command of the castle of Gloucester and the shrievalty of the county, and with the post of justice of the royal forests south of the Trent. He was taken prisoner at the Battle of Lewes, but was among those who were released on condition of appearing in parliament when summoned. The liberty thus gained he employed in raising an army for the king in the Welsh marches, and with Roger de Mortimer succeeded in reducing Gloucester, Bridgnorth, and Marlborough. Cited by the parliament to give an account of his conduct and failing to appear, he was declared an exile.

In the spring of 1265 the timely appearance of a force under the joint command of Clifford and Roger de Leybourne prevented the recapture of Prince Edward, then a fugitive from the castle of Hereford. Clifford also greatly distinguished himself at the battle of Evesham in August of the same year; it was to him that John Fitz-John, one of the few English supporters of de Montfort who left the field alive, owed his preservation.

In recognition of his services the king released him from a debt of 399l. 17s., granted him very extensive estates in Warwickshire and Leicestershire, and put him in possession, jointly with Roger de Leybourne, of certain estates in Westmoreland which had belonged to Robert de Vipont (Veteri Ponte).