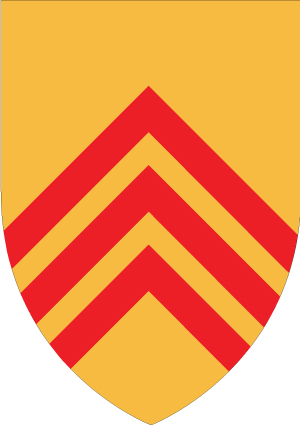 Gilbert de Clare, 6th Earl of Hertford, 7th Earl of Gloucester, 3rd Lord of Glamorgan, 9th Lord of Clare (2 September 1243 – 7 December 1295) was a powerful English noble. He was also known as "Red" Gilbert de Clare or "The Red Earl", probably because of his hair colour or fiery temper in battle. He held the Lordship of Glamorgan which was one of the most powerful and wealthy of the Welsh Marcher Lordships as well as over 200 English manors (172 in the Honor of Clare).

During the Second Barons' War in April 1264, Gilbert de Clare led the massacre of the Jews at Canterbury, as Simon de Montfort's supporters had done elsewhere. Gilbert de Clare's castles of Kingston and Tonbridge were taken by the King, Henry III. However, the King allowed de Clare's Countess Alice de Lusignan, who was in the latter, to go free because she was his niece; but on 12 May de Clare and de Montfort were denounced as traitors.